Life is full of unexpected turns. For Sarah Stork, moving to a farm in Georgetown, Tex., proved to be the catalyst that launched her career as a metal artist.

Life is full of unexpected turns. For Sarah Stork, moving to a farm in Georgetown, Tex., proved to be the catalyst that launched her career as a metal artist.

It all started with a pipe fence that needed to be built on 14 acres of land. Stork wanted to help with the fabrication of it and other repairs needed on the farm, so in 2012, she enrolled in Austin Community College’s Structural Code Welding program, eventually earning her associates degree.

“I wanted to do something that would be useful for my husband and [learn] a trade that would benefit not only him but me as person,” Stork recalled.

Little did she know at the time that trade would take her far beyond fixing fences and into first place of a national art competition.

Taking the Bull by the Horns

Stork had only been welding for three semesters when an instructor invited her to participate in the 2015 SkillsUSA State Competition. He suggested she join the fabrication team, but Stork received less than a warm reception. When the instructor introduced her to the other men on the team, they laughed and continued on their work. The instructor countered their indifference with the suggestion that Stork build a sculpture, despite the fact that she had never made one from metal before.

Stork rose to the challenge, making a Longhorn bull that was oxyfuel gas and gas metal arc welded. She won first place in the state level and second in nationals. In 2016, she returned to the nationals final and won first place.

“I made the Longhorn bull and that kind of set the pace for the direction of my life of going with the art,” Stork said. “I can do structural, but I'm really enjoying the art and freedom of that and the reactions I'm getting for things I'm making.”

Committing to the Craft

The majority of Stork’s pieces are fauna, with sculptures including stingrays (Fig. 1), a sea turtle (Fig. 2), a shark, an Indian runner duck, fish, a hen, and more. Among these one-of-a-kind metal animals, a butterfly woman stands out from the group — Fig. 3. The sculpture, named Angela, was what Stork called a watershed moment in her career. 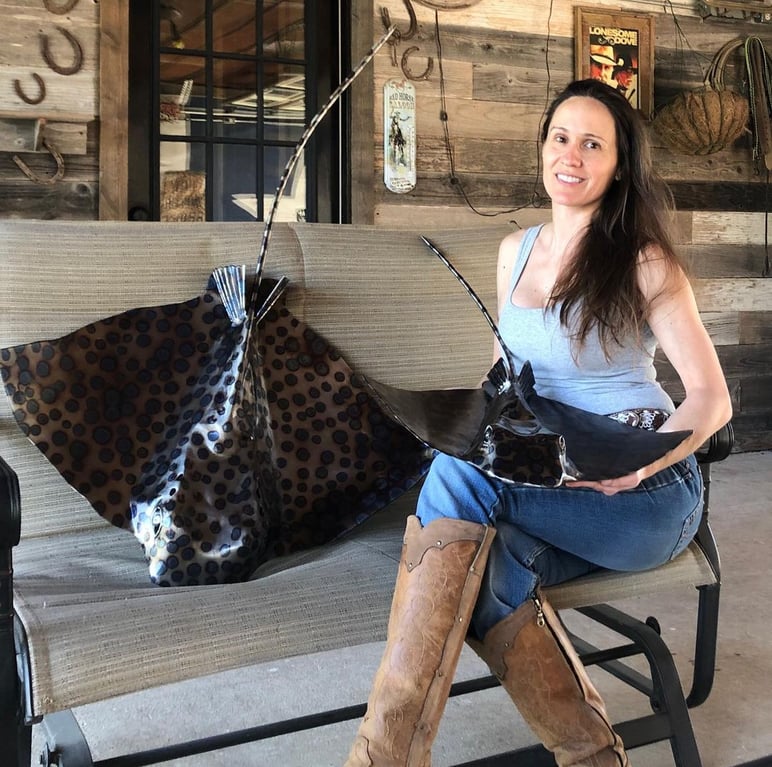 Fig. 1 — Sarah Stork poses with two stingrays she made for Chris Mapes, president and chief executive officer of The Lincoln Electric Co. All photos courtesy of Stork (@sarah_stork_)/Instagram. (Instagram.com/sarah_stork_)

“I felt like I had symbolically made myself into a butterfly. So I'm going to soar; I'm going to make art . . . Because before then I was only making like one to two sculptures a year since 2015, and it was in 2019 that I did the butterfly. I thought it was like a transformation that I'm going to be an artist.”

Now fully emerged from her metaphorical chrysalis, Stork spreads her wings with commissioned artwork and still finds time for the occasional fabrication job. And while creating sculptures of animals and repairing farm equipment might seem very different, Stork sees a crossover between the two.

“The whole fabrication and structural part of [welding] is still artistic,” Stork explained. “It still creates beauty, especially in buildings and how they design them. Truly everybody who is a welder is an artist because it takes the skill, hand-eye coordination, and ability to see what you're doing and keep a steady hand like a surgeon. They're so similar in many ways, an artists and a fabricator.” 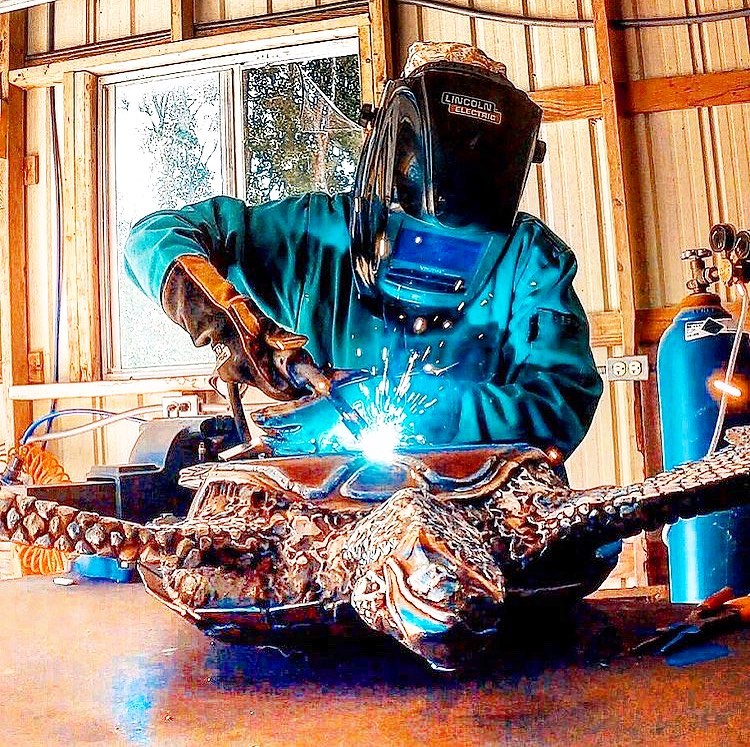 Every artist knows the trial and error that comes with their craft. The first sculpture is not always the final one, a lesson Stork learned with a metal pineapple. There are two versions of the piece: the second one fits her vision while the original serves as a reminder that sometimes you have to step away from a project.

“It reminds me, don’t just keep welding and think that it’s going to change into what you want it to be. So it's like a doorstop at this point,” Stork revealed. “It wasn’t up to the quality that I was looking for. So I stopped and cried, and then I pulled myself up by my bootstraps and started making a different pineapple, and it turned out fine. So, you've got to stop and look at what you're doing and [be able to say], nope, this is not working.”

The pineapples serve as a testament to Stork’s drive to not just get the job done but to do it well. She believes that quality is what makes her a good welder. 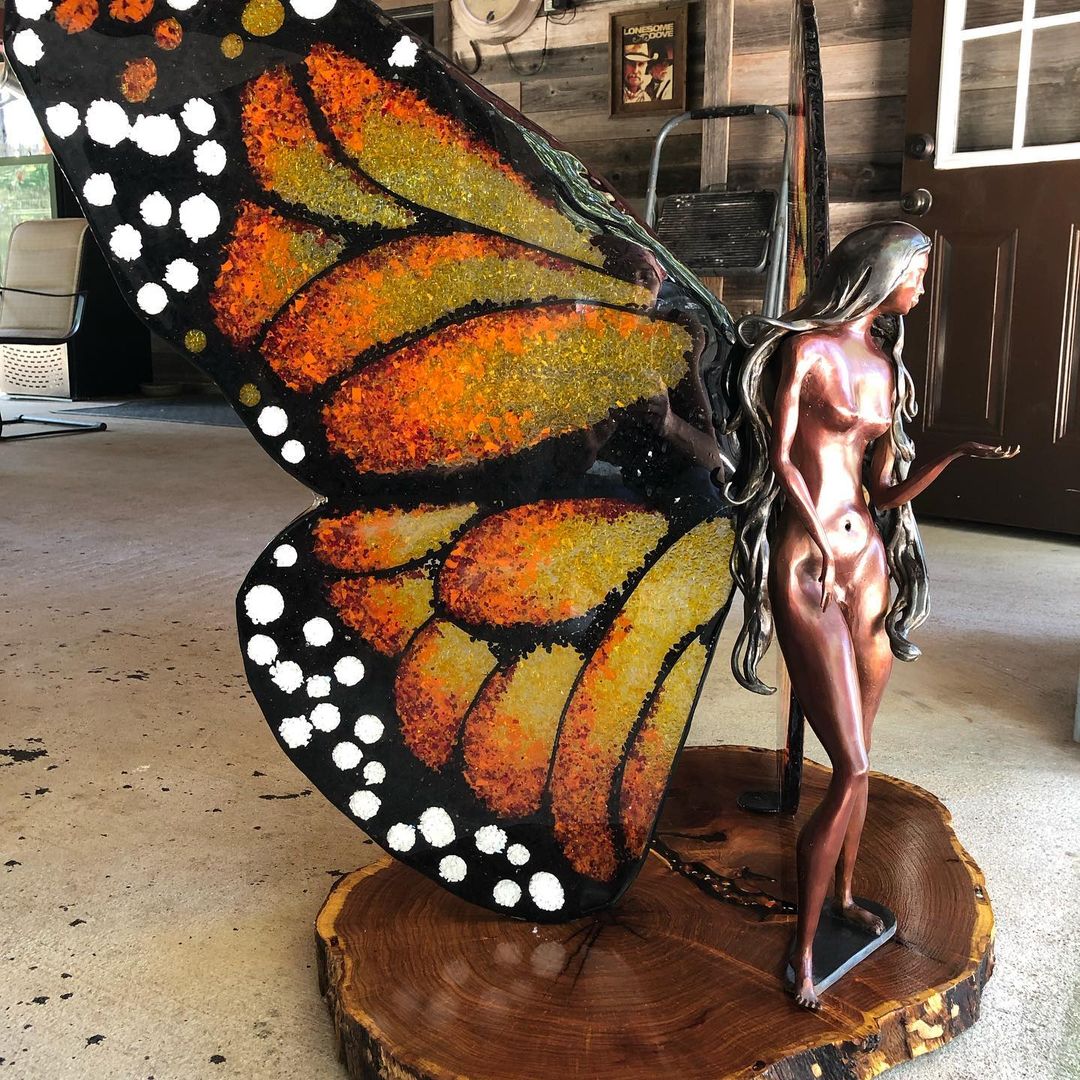 Her work ethic and talent were noticed by Baileigh Industrial, who came across her Instagram page (Instagram.com/sarah_stork_) and offered to sponsor her. The company provided her with equipment, such as an English wheel, planishing hammer, shrinker stretcher, Beverly shear, and more.

Armed with an arsenal of new equipment, Stork’s work ethic was put to the test on a recent sculpture: a 6-ft-long shark made out of 16- and 18-gauge sheet metal over a frame of 1/8-in. rod — Fig. 4. It was her first piece made from both cold forming and gas tungsten arc welding (GTAW). Stork came across challenges learning how to cold form it with the new machinery and having to remember how to GTAW after not doing it for a long time. “Over time, I got better and better. It takes practice. I thought this was the most challenging [project], but I got it done,” she affirmed. 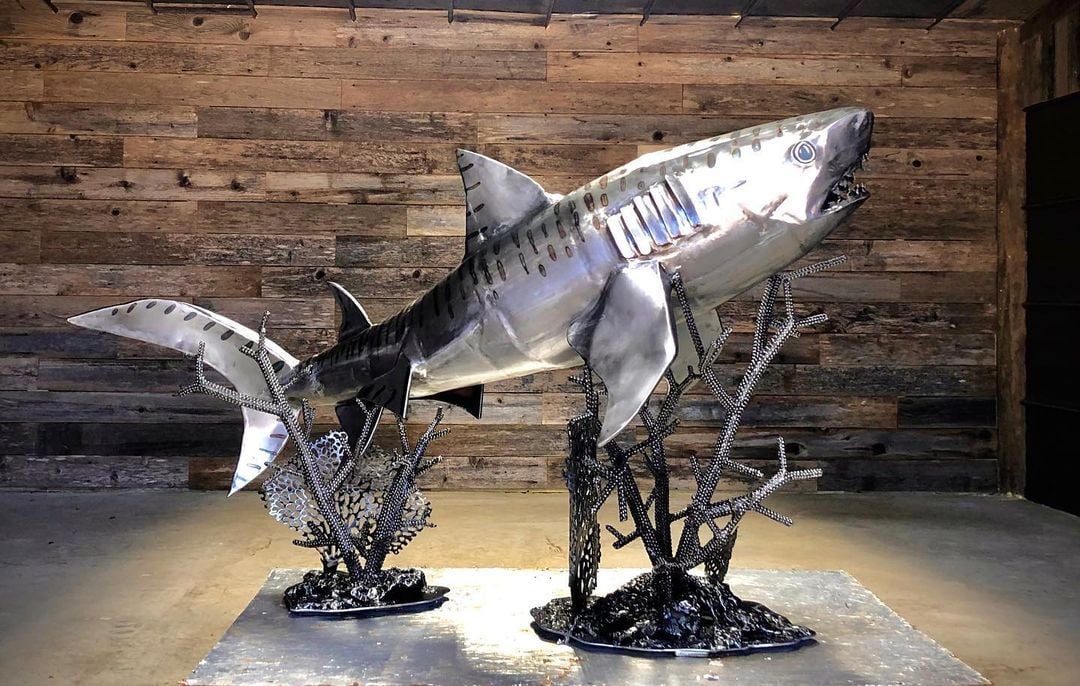 Fig. 4 — This shark sculpture was Stork’s most challenging project.

At the time of interview, Stork was working on a cat sculpture as a breather between sea-life projects and upcoming commissions. Beyond that, refining her skills is an ongoing pursuit. Stork plans to practice more GTAW and work with mild steel on the English wheel, both with the intention to incorporate more aluminum and stainless steel in her art. A shop expansion in the near future will also help her move in this direction.

“With the shop expansion, I can have a clean room and start doing stainless and other types of metals without having all that grinding dust and rusty steel that I've been working with as of late.”

Further fueling her headway is the positive response her work has garnered in the welding community. With her commitment to improving, natural talent, and hard work, this Stork is set to soar to great heights.

This article was written by Alexandra Quiñones (associate editor of the Welding Journal) for The American Welding Society.

Arc 2 Art: The Coalescence of Welding and Creativity

Arc 2 Art: The Coalescence of Welding and Creativity

Experience the journey of two female welding and metal fabricating artists as they collaborate from a distance on one single piece of welded artwork in this exciting “Arc 2 Art,” video series.
Read more

Four schools across four states battle in one advanced manufacturing competition – this is Project MFG’s National Challenge that premiered in a new pilot, Clash of Trades, on YouTube, April 20, 2021.
Read more

ELCo Enterprises Inc. — a Michigan-based provider of welding wire products, torches, and cell support equipment — has always prided itself on supporting veterans in any way it can. The company was founded by a veteran, employs veterans, honors those who served, and has benefited from its association with the armed forces.
Read more