On March 25, in honor of Women’s History Month, more than 200 professionals gathered around their computers to attend the first-ever Women in Welding Conference. 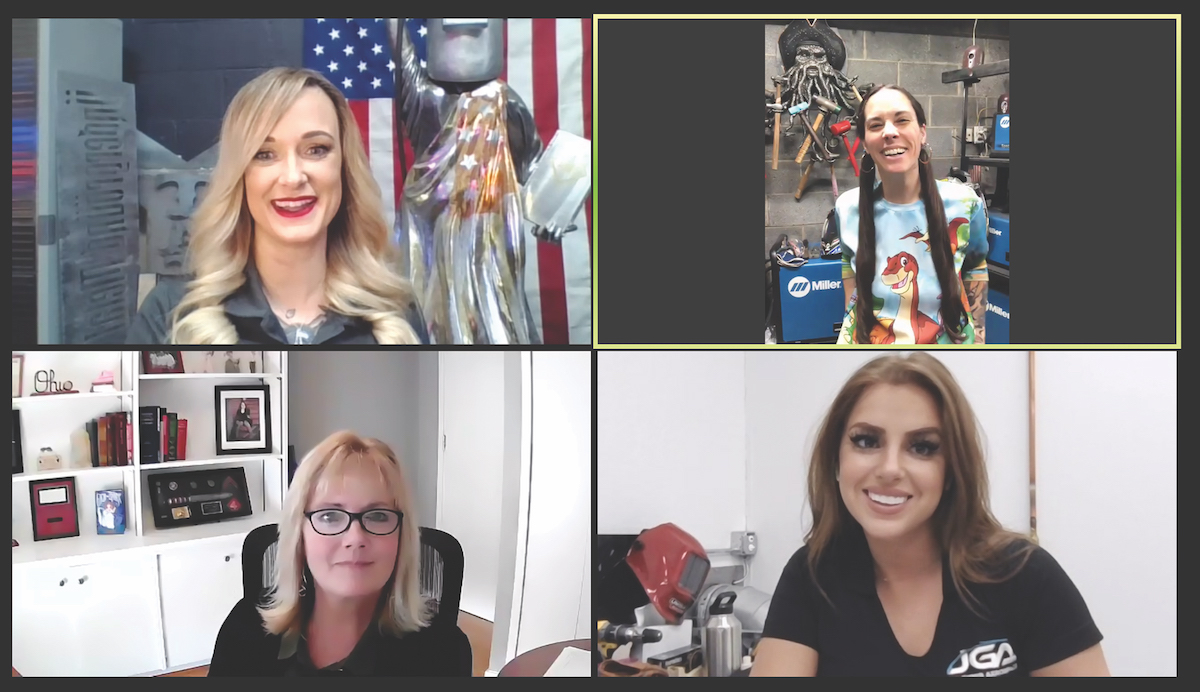 On March 25, in honor of Women’s History Month, more than 200 professionals gathered around their computers to attend the first-ever Women in Welding Conference.

The virtual one-day event was hosted by the American Welding Society (AWS) to celebrate the contributions women have made to the welding industry. It spotlighted prominent women across different sectors of the welding industry and provided a platform for them to share their professional history, the challenges they’ve overcome, and insight into how they advanced their careers.

The following includes highlights from the guest speakers’ presentations.

Chloe Hudson is a welder at Joe Gibbs Aerospace, Huntersville, N.C., which she describes as her dream job. Her talk centered on the gender discrimination she has faced throughout her educational and professional journey.  Because of the prejudice she experienced in her college welding program, Hudson admitted she left school in favor of a job in nuclear maintenance. This decision led her to gain confidence and experience in many areas.

“There wasn’t a job that I didn’t say ‘yes’ to. I said ‘yes’ to everything,” she explained.

However, the job turned Hudson into a “Jack of all trades, but a master of none.” Noticing that those who had training in a specialized craft were making more money than her, she decided to return to college. After graduation, Hudson battled gender bias in job interviews, but having a strong skill set gave her the confidence to demand that employers give her a chance.

Elaborating on some of her negative experiences at job sites, which included alienation from her male co-workers, Hudson recommended that women find employment where they’ll be valued and accepted.

“If someone doesn’t want you working for them, there’s other people who do. I can guarantee you that,” she stressed.

Barbie Parsons, popularly known as “Barbie the Welder,” is a metal sculptor, business owner, author, and social media celebrity in Erin, N.Y. She began her speech by describing her life before welding, which included surviving drug addiction, living with an abusive husband, and struggling with poverty.

Parsons also shared how she worked in the automotive industry for many years. However, she eventually grew tired of the sexism she encountered, as well as the meager pay, and began her own business hauling scrap metal. Despite her hard work, she continued to struggle financially.

The tide turned when she became interested in welding after watching a scene in the movie Cast Away that depicted a woman welding angel wings. Ignoring the discouragement of those around her, she followed her gut and enrolled in a welding course.

“I had zero artistic talent [and] had never welded before, but I knew in my soul I needed to be a metal sculptor,” she said.

Parsons again ignored the naysayers when she started her own metal sculpture business. At first, it didn’t do well because she didn’t know how to sell her masterpieces or market herself. Broke and feeling defeated, she began meeting with a local entrepreneur group that consisted of lawyers and business owners to learn more about growing — and saving — her business. Absorbing their suggestions, she made the necessary changes and now enjoys a lucrative career in the welding industry. She is glad she believed in herself when no one else would. 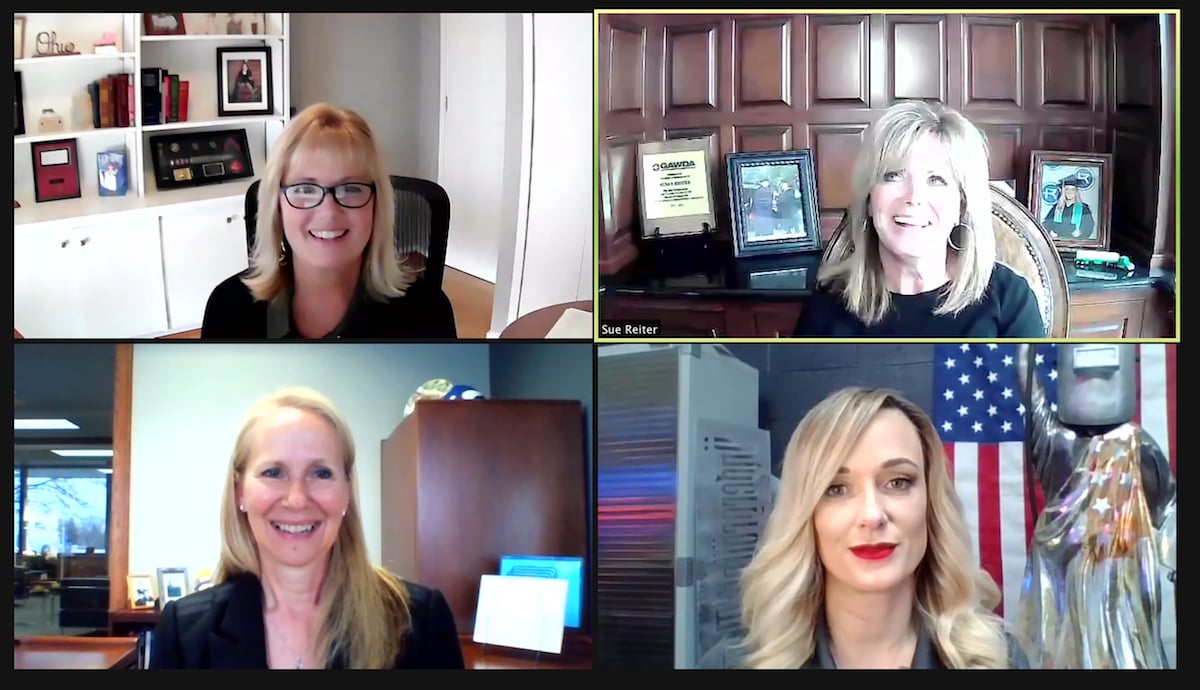 Becky Tuchscherer is the group president of commercial and greater China welding at Miller Electric Mfg. LLC, Appleton, Wis. The company is a wholly owned subsidiary of Illinois Tool Works Inc., a Fortune 200 industrial manufacturer of consumables and specialty equipment.

During her speech, Tuchscherer provided information about her early career and education, which included a bachelor’s degree in accounting, a master’s in business administration, and several positions in finance. Taking a job with Miller Electric in 1988, she admitted that, when she first joined the company, she did not know anything about welding.

“. . . [O]ne of the things I learned over my career is I need to know enough, but I don’t need — from the business side of things — to be the expert,” she affirmed. “I have teams around me to help with that.”

Looking back on her more than 30 years in the welding industry, Tuchscherer explained that she has benefitted from taking risks and trying new things. For instance, she revealed she went outside of her area of expertise in finance earlier in her career by accepting a position as a business unit manager.

“There are a couple of times in my career where I’ve learned the most, and that’s when I’ve stepped outside my comfort zone,” she said.

In addition to professional challenges and successes, Tuchscherer spoke about the difficulties of juggling motherhood and a career. She credits having a support network to rely on for helping her focus on growing her career. Detailing some of the sacrifices she made to be able to spend more time with her children, Tuchscherer advised attendees to learn how to “let go” so that they may prioritize what is most important.

Sue Reiter is the Americas distributor manager at Air Products, Allentown, Pa., a Fortune 500 manufacturer of industrial gases. She kicked off her talk by revealing she got into industrial sales at the recommendation of a college professor. She holds a bachelor’s degree in business and a master’s in finance and has held several jobs in the industrial sector before securing a position with Air Products. Because she had little familiarity with industrial gases, Reiter had to take many classes, including a welding course, to gain the necessary industry knowledge. She admitted the process was overwhelming at times, but she persevered.

A female in a male-dominated industry, Reiter described herself as often being the only woman in the room. This meant she had to be careful with how she navigated herself.

“As a female, and you’re trying to get your point across, sometimes if you’re too aggressive, you might be known as a bitch,” she said with a laugh. “Or if you’re too soft, you’re too weak, so you just have to try to find your balance.”

However, Reiter stressed that she had people in the industry who supported her, and that made a difference. She further recommended that female professionals get to know their male counterparts along with their spouses as well as the spouses of clients.

Because her roles with the company have included a lot of travel, Reiter had to find a balance between work and motherhood. What helped her was having a strong support group to rely on, but she also emphasized the importance of being present for the important moments.

The virtual Women in Welding Conference gave attendees the opportunity to hear about the challenges women in the welding industry face. It also allowed attendees to learn how these obstacles can be overcome as well as how professionals can help promote gender equality in the workplace. To learn more about this event, visit awo.aws.org/conferences/past-conferences/women-in-welding-virtual-conference-2021.

This article was written by Katie Pacheco (associate editor of the Welding Journal) for the American Welding Society.

Welding is among the most crucial and essential skilled trades that impact everyday life, yet the number of skilled welding technicians and professionals continues to decrease. It is anticipated that by 2024, over 300,000 welders will be necessary to satisfy our nation’s workforce demands (Emsi, 2021). To impact this decline, the American Welding Society has launched a new initiative targeting students and early career welders, titled "AWS Certified."
Read more